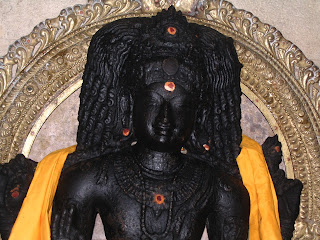 Nandhi, The Sacred Bull is normally seen in front of The Sanctum in all Shiva Temples, facing The Lord. There are places like Thiruppungur and Patteeswaram where the Bull can be seen few feet away from the straight line where it used to be, yet, facing The Shiva Linga Murthi. There are also some places like Thirumullai Voil,near Chennai, Somangalam, near Kunrathur and Thiru Vaigavur near Swamimalai where The Nandhi and The Lord face the same direction.  We come across a rare sight where the Nandhi, seated right in front of the main deity, seen turning His head by 90 degrees and looking at the big and marvellous Dakshinamurthi,nearby. 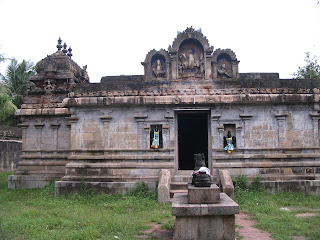 Raa Patteswaram is a small village on Kumbakonam- Thiruvarur bus route near Manakkal-Iyyampettai where the Temple is located near the motorway. It is maintained by Nattukkottai Nagarathar Community. The west facing Temple has no Gopuram in the front. The shrine, at a slightly elevated place has Lakshmi and Saraswathi on both sides of the entrance. The only outer Prakaram is full of grass which has to be cut to clear the way for devotees who wish to go round the temple. Maha mandapam unusually houses many Murthis who normally occupy the Goshtam/separate shrines in the outer Prakaram. A big idol of Ganapathi , very well carved one is seen here. A beautiful sculpture of Subramanya seated on Peacock is seen with his consorts. The Murthi, carved in a single stone,with six hands should delight the devotees. 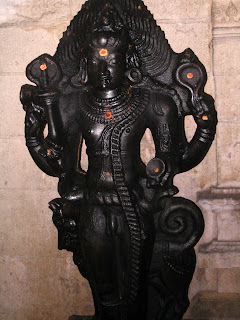 The huge idol of Bhairava is also a must watch. The crisply carved Murthi with jwala kesam,Tamarukam, Pasam,Bhiksha Patram, Kapala mala and Thrisulam is an outstanding one. Ashtami (eighth day ofter Full moon day)puja  is conducted for Bhairava
Moola Murthi is called Seshapureeswarar as the figure of a serpant is seen on the bana Linga. Ambikai , facing south is known as Andhapura Nayaki. Childless couples come here and take bath in the Temple Tank and worship the Lord and The Goddess to be blessed. Although a separate "Padhigam" is not available for this place, it has figured in Saint   Appar's Thevaram Hymn, and called as "Vaipu Sthalam" 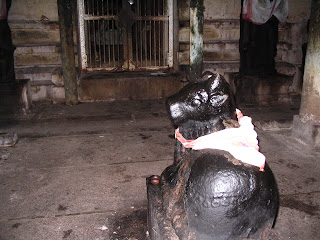 The Nandhi in front of Seshapureeswarar is unique as it has turned its head by right angles and  the place where it looks houses a superb Dakshinamurthi. It is also unique that the Murthi,normally found in the Deva Koshta in the south prakaram is seen here in the Maha mandapam. This masterpiece has a smile which is unparallel. His curling locks and the finely carved arnaments, Yagyopaveedham on His chest are simply absorbing. It makes the devotee unmoved for a while. Pujas are conducted once in a day for this rarely visited Temple which is unique in many aspects. We come out of the Temple with Prayers on our lips for the betterment of the shrine.

It is desirable if people cultivate the habit of visiting such rare temples and render all possible help to preserve the  glory and at the same time extend a helping hand to the priest whose income is negligible. Negligence on the part of people and Goverment can only ruin the priceless structures which have withstood for many centuries because of good patronage. Devotees from nearby towns should make it a point to visit atleast one such temple in a month , the act, no doubt,will add value to their devotion.

Posted by Sivapathasekaran at 8:28 PM 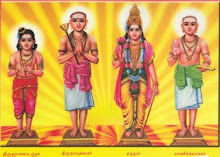